Apparently the new job is big on celebrating birthdays. Fine by me, especially when birthday girl happened to mentioned she liked ice cream cakes. I’d like to also mention there is a Cold Stone Creamery within walking distance–12 blocks, to be exact, and not of the avenue-block variety (if you live or been to NYC, you know that there’s a big difference between a street block and an avenue block!)

We got on the website to try and figure out which flavor birthday girl would like when we discovered ice cream cupcakes in an assorted pack: problem solved!

After the singing and the wish-before-you-blow-out the candles, it came time to choose a cupcake. Birthday girl went for chocolate decadence, but I went for the birthday cake cupcake. 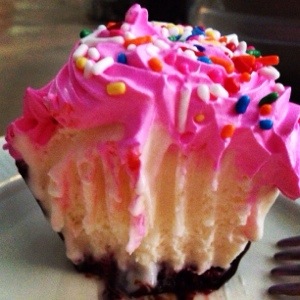 One bite and I was hooked! First of all when I went to take off the wrapper, I realized it wasn’t paper. It was CHOCOLATE!!! Seriously. CHOCOLATE!! And maybe some of you aren’t shocked and this is common knowledge, but not to me–the only other time I had ice cream cupcakes, they had wrappers.

On the bottom of the cupcake was a smaller layer of red velvet cake, then the rest of the cup was filled with birthday cake ice cream, topped with pink icing and, naturally, sprinkles.

One word: scrumptious! Honestly, ice cream is never anything that even enters into my brain when someone asks what kind of cake/cupcake I like, but I think that will definitely be changing!!

Oh and before I dip into a sugar-induced nap, Happy Birthday, Ainsley!!