Life is funny.   Recently, I went back home to Texas for a visit, which conveniently coincided with Jeff (having won last month’s challenge) setting this month’s challenge as Environment.  Hailing from the Texas Hill Country Appellation, I mentally began creating bullet points about the environment of the Texas Hill Country Appellation and which wineries I was going to feature–debating if I should focus on one or several.  While I was at home, I did quite a bit of tasting in preparation for this wine writing challenge (I’m thorough like that).  Although ironically most of what I was tasting were Hill Country wineries using grapes from the Texas High Plains vineyards, but I digress.

Then it happened.  After departing Texas, I went back to NYC via an extended stopover in Minnesota.  On Day 2, April took me to a little town on the St. Croix river called Stillwater.  We were there for the tacos (that’s a story for another time)–but after lunch we wandered down the main street of the town, poking around the boutique shops in search of a brewery/winery/distillery (Stillwater has some of each and long ago, April learned long ago that a happy Shez is a Shez plied with alcohol and coffee and food).  We saw the Northern Vineyards Winery and headed inside.

They offered tastings and, well, why not?!?  I figured it would be great feature for a future-topic-not-yet-determined MWWC and then the tasting began.  I was introduced to 3 new grape varietals, which I had never heard of before and upon asking about them I was told that they were developed by the University of Minnesota (Go Gophers!).

Well shit.  Of course, after hearing that I realized that what better way to incorporate ENVIRONMENT into my wine writing like discussing grapes developed specifically for growing in a particular region.  Since I was only on my second taste, I knew it had to be fate rather than the alcohol talking.

So without further ado, I’d like to introduce you to the following grapes developed by and/or with the University of Minnesota (Go Gophers!):

Northern Vineyards uses all of these grapes and other varietals, like Le Crosse and St. Croix, which were developed to withstand the hearty Minnesota (read: cold) environment, basically “varieties adapted to severe winters and short growing season are chosen.”  For all the grape varietals suited for growing in Minnesota, visit the University of Minnesota (Go Gophers!) Fruit Research website.

And now on to some tasting notes.

The first thing I sampled was the Prairie Smoke, made with La Crosse grapes.  I’m not a big fan of fumés in general, however, this one was light and fairly crisp for a fumé. In addition to the smokey nose, there were also ginger and hints of grapefruit.

Probably one of my favorites that I tasted was the Main Street Rosé.  A dry, crisp blend of La Crosse and Frontenac grapes.  This wine is very fruit forward with lingering strawberry both in the finish and on the nose.

They also have a semi-sweet blush, Lady Slipper, made with Frontenac Gris grapes.  Before tasting I was worried I had just been poured something akin to Strawberry Hill, however, the Lady Slipper was medium bodied and not overly sweet which I think would pair nicely with a cheese & fruit plate. 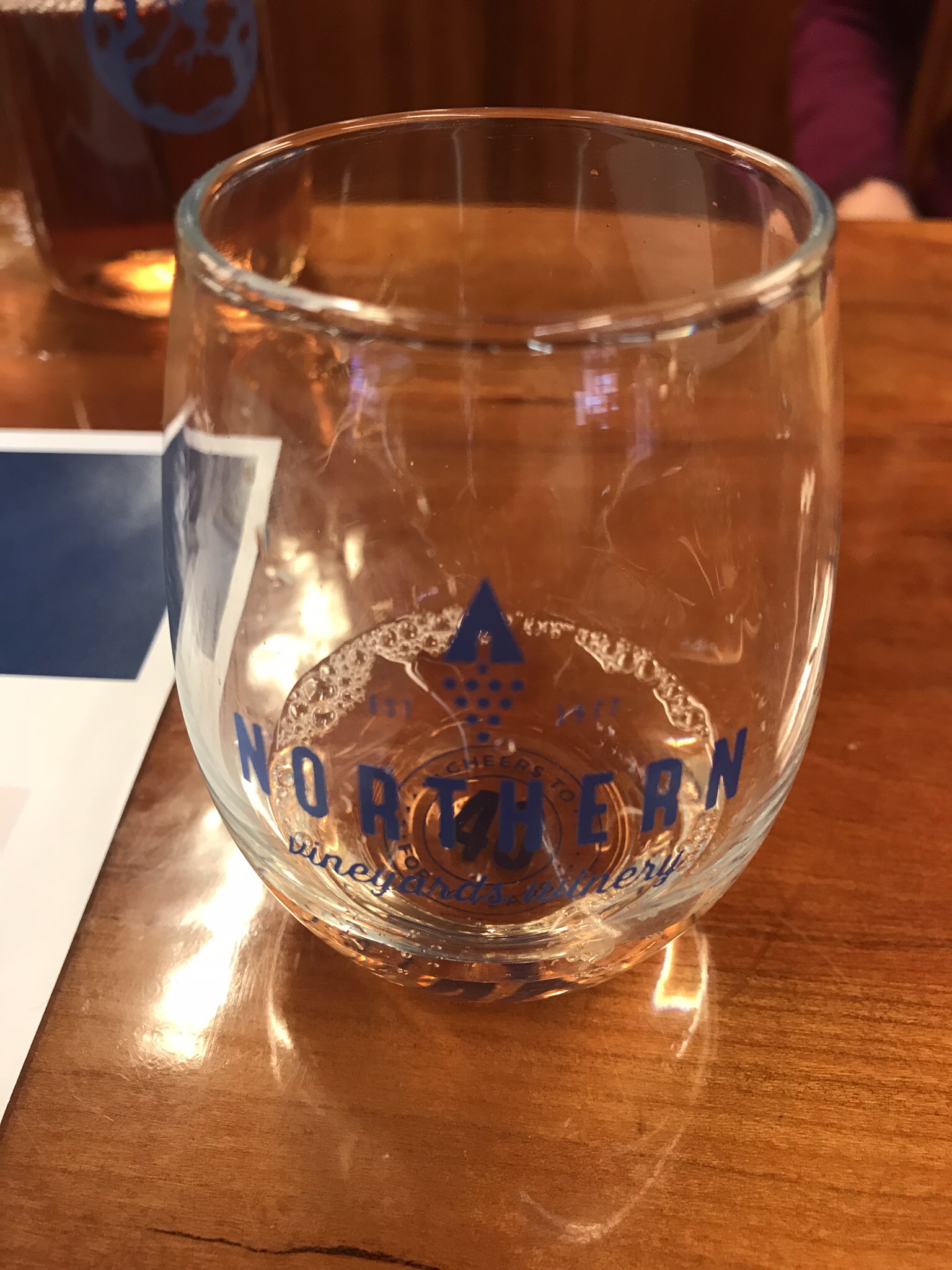 Of the reds I tried, I think the Downtown Red was my favorite.  A blend of Frontenac and Marquette, it was smooth.  It had a hint of blackberry and white pepper on the finish and reminded me of a light cabernet sauvignon.

I have to confess I was surprised not to find a dessert wine offered–I would think that the early frosts would lend itself to naturally sweeter wines, alas Northern Vineyards did not offer any.

It was a fun tasting–our hostess seemed to have a good handle on the wine grapes of Minnesota, I got to taste some varietals I had never even heard of before, and learn more about wine!

So much emphasis is placed on the environment in which grapes grow–and for good reason, terroir is one of the most important factors in the world of wine. We often talk about how this region or that region is perfect for growing grapes, but what about the areas that are not?  Hybrid and indigenious varietals catering to the less than perfect environment–be it Frontenac in Minnesota, Black Spanish in Texas, or even Roobernet in South Africa– seem to be the solution for sustainable grape growth and wine production.

The countdown is on to what has become over the years my favorite holiday: Thanksgiving.  I mean, how do you not love a holiday dedicated to food and family and friends and football?!?!?

Of course, it is all too easy to go overboard and completely stress yourself out: how to prep the turkey, how to bake the turkey, whether or not to brine the turkey, what sides, how many desserts, which wine, comparing yourself to that one person in your life who goes over & above so much they make Martha Stewart look normal, and on and on…

All you need to know is in this video from Mary Risley (Tante Marie’s Cooking School) (namely don’t stress and pour more wine!). It is on the longer side, but you definitely get the gist in the first few minutes!  Also a word to the wise: if you’re listening to this at work, perhaps you want to put in your headphones.