If you don’t mind indulging me, I’d like to continue regaling you with our Turkey & Greece trip.  I know, I know–everything is out of order because we actually started our trip in Istanbul and I have yet to write about that.  I’m just saving the best for last!

Not to worry because today you get some photos and a story about the island of Symi.  We actually docked in two places on Symi–the first was by an 18th century Greek Orthodox monastery.  Fortunately for us, our dingy was working at that time, so we dropped anchor in the small harbor and were taken to shore.  We wandered around for about an hour or so–exploring the monastery, the beach, and the odds and ends that were available to us (although, there wasn’t much on this end of the island!). 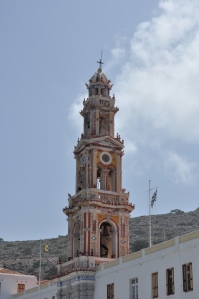 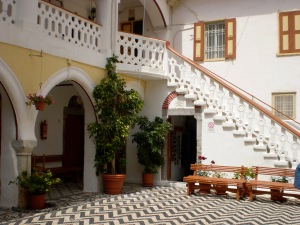 I was completely in love with all the stone work in the walkways! 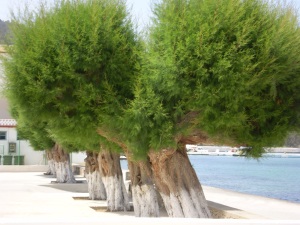 probably my most favorite shot!

We did meet a local: a young boy who was fishing for urchins. One of the guys in our group started talking to him and before we knew it he was eating raw urchins fresh out of the sea!  While I love to do this with oysters, I was a bit more hesitant with urchins.  I’m not sure why–perhaps it was the random giggling by the local kid.  When we finally got him to stop giggling, he declared that there were certain urchins you didn’t eat raw.  Which ones?  The black ones, you know, the ones our tour friend had just spent the last 15 minutes indulging in!  He declared it was a tasty way to go and we all boarded the boat laughing, but wondering what truth there was in the boy’s declaration.  We tried to ask the Captain and the Chef…and all we got was a “it’s okay, it’s okay.  yeah, yeah, fine, fine!”

We then sailed around to the main (aka populated) part of Symi, which was it was amazingly beautiful–as per usual in the Greek Islands.  A quaint, picturesque sea port, where we were allowed to wander for a couple of hours.  We did a bit of shopping, stopped for coffee, and then I saw it.  A house for sale.  I stopped, looked at the house, looked at April and just asked her to send me the pupcicle because I just found my new home. 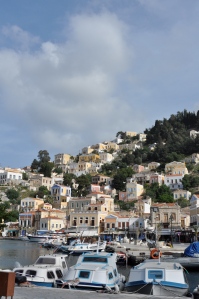 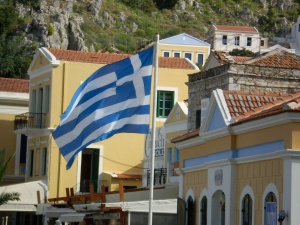