I’ve inherited a cat.  He, being Toulouse, spent the first year or so of his life with us–so he is not unknown to Addy.  He is, in fact, her kitty.

When Toulouse first moved in, he was small enough to fit in your hand–and naturally thought he could easily take on a 90lb dog.  Toulouse would follow Addy around the house and wait patiently for the perfect moment to strike.  His favorite spot was behind a pile of books at the top of the stairs: a well thought-out ambush spot for the Princess as she came up the stairs.   The problem, of course, being that she tended to be slightly oblivious of this ball of fur and could easily knock him down the stairs with her big ol’ labrador tail.  I’m quite sure she did a time or two.

A couple of years have passed, but Addy, of course, still thinks of him as her kitty.  Toulouse–for some reason unbeknownst to me–will even allow her to occasionally bathe him (although he always looks mortified while she’s licking him).  Since Toulouse has moved back in, I’ve seen a lot of pouty Addy faces that some of her affection might be given to Toulouse, however, she always has my back when I’m fussing at him to stop clawing the furniture or to get off the countertop.  Addy is more than happy to chase after him, barking reminders at him Get off the counter!  Stop clawing!  Don’t make Momma yell! Come back you need a bath!

Yelling in both human and barking–double whammy!  Poor Toulouse.  Meanwhile, Addy smiles at me I got this, Momma, I got this. 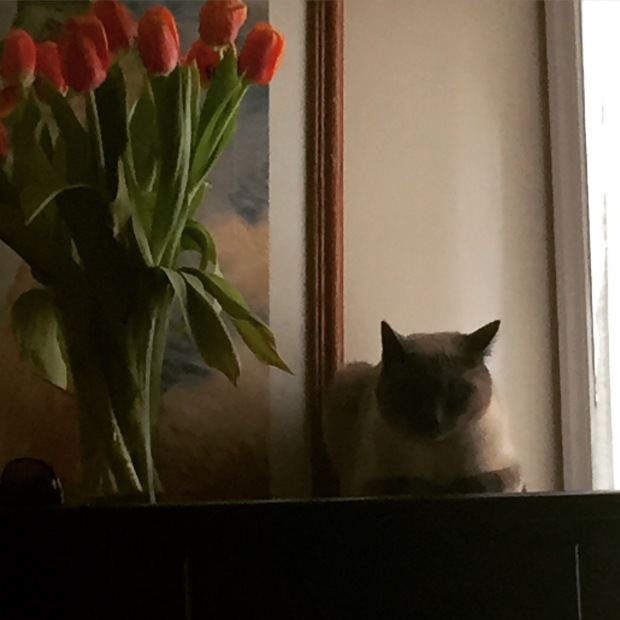 Best seat in the house: a sunny window and far out of reach of a certain cold, wet nose…