I guess it’s no surprise that today is National Champagne Day. According to WalletHub and International Business Times, an average of 360 million glasses of bubbly is drunk today and 25% of all champagne/sparkling wines are sold between Christmas and New Years (sidenote: these numbers are from the early 2010s but research is very scarce on the subject).

And why not? It’s fun, it’s fancy, and seems to hold the promise of better things ahead.

Like Bordeaux, Burgundy–and scotch and bourbon for that matter–there are some very clear cut guidelines as to which wines may legally call themselves champagne*. Namely, they have to be made in the Champagne region of France–just northwest of Paris, if you’re wondering. Additionally, there are only a handful of grapes that can be used Chardonnay, Pinot Noir, and Pinot Meunièr are the three most used grapes, but Arbane, Petit Meslier, Pinot Blanc, and Pinot Gris may also be used, as well as specific methods of fermentation. Visit Comíte Champagne if you wanna read all about it.

*there are a few notable exceptions that were grandfathered in before the rules went into effect, like Korbel, Andre, and Cook’s from California.

And while I’m over all not a big wine snob, I do have to admit that I am a bit of a champagne snob. Not that I don’t like a good Cava or Prosecco. But they’re not champagne. There is just something smooth, comforting, and decadent about the real stuff. And I 100% acknowledge that it is all in my head–and in a blind tasting I couldn’t tell the real stuff from a really good sparkling wine. I like to pretend I could, but I certainly wouldn’t put any money on that!

That being said there is something extra special about Dom Pérignon and over the years I have had the good fortune to try several vintages. So this Christmas when my boss gave me bottle of 1985 I was over the moon and so excited to try it.

We discovered it last summer, hidden away in the far reaches of her parents’ wine bar and no one seemed to know how it got there (to be fair, her parents are in their mid-90s and I have trouble remembering what I ate yesterday let alone what was happening 30 years ago, so no judgements here!)–thus when it was bequeathed to me it was with the caveat that it could be good or not.

It was Dom. I was willing to take that chance! I knew it was either going to be the best thing I ever drank or a goddamn tragedy!

While it was chilling I pulled out my Dom glasses–because what else would you drink Dom out of?!? 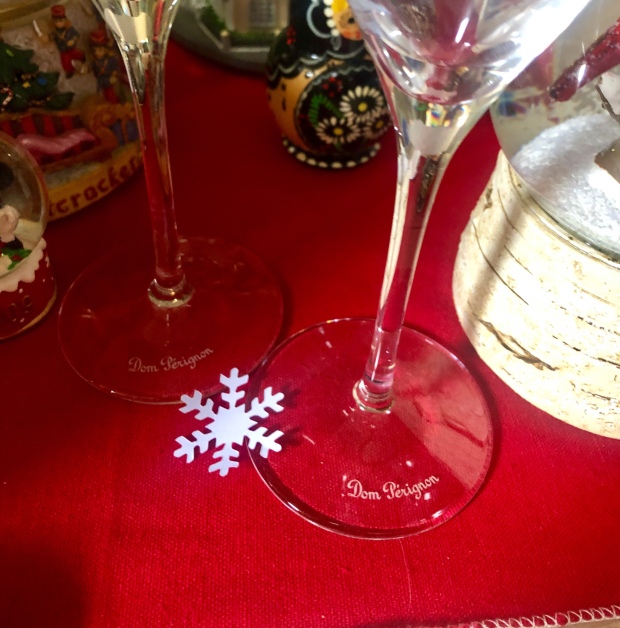 I tried not get too excited as I peeled back the foil ever-so-gently. The cork looked good, there wasn’t any leakage, and I felt a tingling of excitement stirring like champagne soaked butterflies in my stomach. I slowly untwist the wire from the cork and my heart sank. Rather than a tight cork or one slowly pushing its way out of the bottle, it just jiggled. 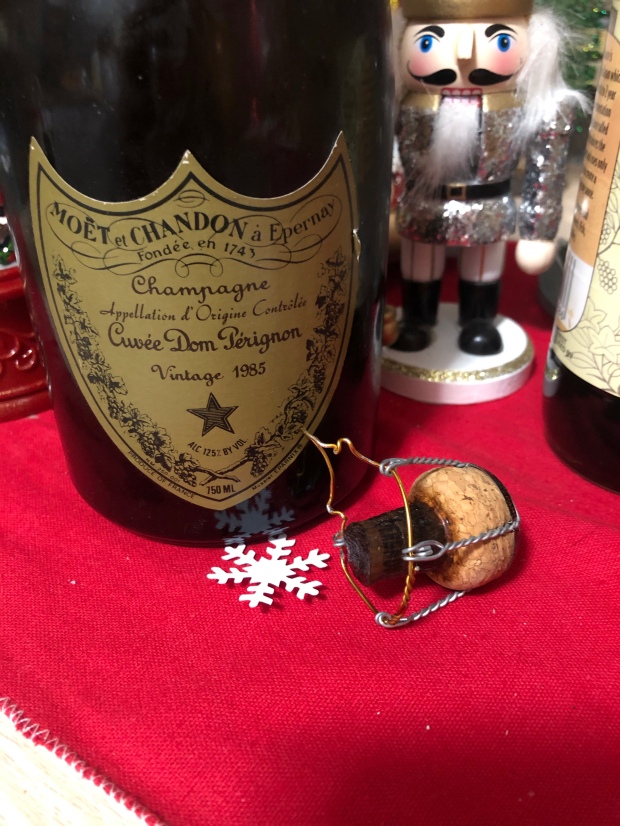 I lifted it out, morbidly admiring the shrunken dark cork and trying hard not to cry. I peered down into the bottle looking at the sediment accumulated along the side of the bottle. I pulled the bottle to my nose, sniffing tentatively. Vinegar.

Out of sheer curiosity, I poured a half glass (I mean, I pulled down the Dom glasses–it would be a shame not to use them at all!). It was a very rich dark yellow color with the tiniest bubbles in the bottom of the glass. I figured what the hell and took a sip.

It was by far the tastiest vinegar I had ever had, with notes of toasted almond and vanilla that to me suggests that had it not been corked, it would have been a stellar glass of champagne.

In the wise words of my boss’s father: c’est la mort! And a good reminder that you don’t always have to save the good stuff for “a special occasion in the future.” Sometimes it is so much better to have that special occasion just be a Tuesday.

Happy New Years, ya’ll and best wishes for a wonderful and prosperous 2020!

Remember my post about Wine Pairing where I mentioned a special Burgundy I had collecting dust at the bottom of my wine rack? Well, I recently went to Florida to celebrate the Big Birthday (a little early) with the BFF & BFFH. I thought it would be the perfect time to take The Burgundy along to open in celebration of the Big Birthday (and conveniently fulfill my promise to share it with the BFF)!

My first sigh of relief was arriving in Florida with the wine safely in one piece and not soaking all the rest of my stuff.

I was a bit trepidatious when it came time to actually open it, as when I cut the foil, I noticed the cork was looking a bit soaked. Crossing my fingers, I inserted the corkscrew and, while holding my breath and perhaps closing my eyes, I pulled gently and out it came–in one piece and smelling amazing.

I poured a sample. Swirl, swirl, swirl. Big breath….mmmm…dirt, as the BFF would say (or, as the rest of the world would say, earthy). Second sigh of relief. The taste was, well, magic.

We gave it a few moments to breathe the fresh air it had been denied for 12 years (helped along with an aerator) and it opened up so beautifully. We had no choice but to just sit there and absorb the moment.

And then…then the BFF announced she needed chocolate. Yes, chocolate–Peruvian dark chocolate fudge, to be exact. The pairing transcended amazing and entered into heavenly.

It was a quiet celebration: no pomp, no circumstance (okay, a bit of tweeting–but that’s it!). Sitting there with these two wonderful friends and sharing this amazing wine reminded me that through all the ups and downs of the last few years, it was moments like these that should be savored–just like a 12 year Burgundy.