It wouldn’t be a Hawaiian vacation if you didn’t spend at least a little time at the beach.  We debated about when/where we wanted our beach day to be (aside from our quick trips to the Black and Green sand beaches).  Ultimately, we decided that it might be a nice break towards the end of the trip to have a few less packed, more relaxing days–so we opted for Kauai and we found a beach not far from where we were staying.

It is in Poipu and (according to the Poipu Beach Resort Association) “during most of the year, the waters here are best for advanced surfers due to a short shore-break.”

I have to admit waves were a little rough.  Being neither surfers nor advanced surfers, Tracy and I instead tried a little bodyboarding.  The results varied, but mostly ended up in laughter (well, on my part–Tracy was far more adept at it!) 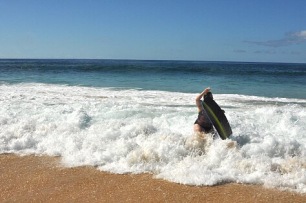 Picturesque and not crowded, it was a great place to kick back and relax for awhile. While it may not look like it, it’s pretty steep from the back of the beach to the water–so our legs got quite the workout walking from our lounging spot to get into the water (not that we were complaining…much!).

With the somewhat choppy waves and the rocky juts in the shoreline, it wasn’t difficult to imagine how Shipwreck Beach got its name.  But when the waves are right, apparently it’s one of the locals’ favorite spots for surfing. 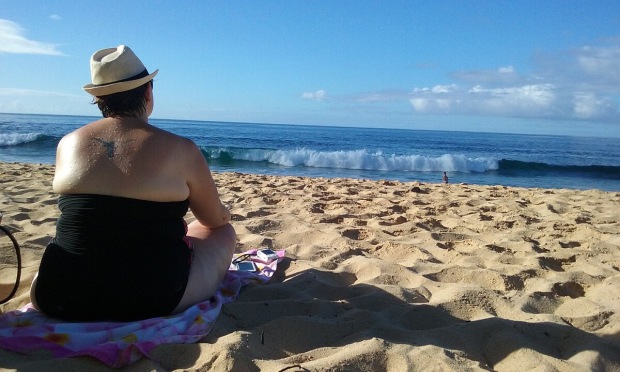 I don’t know about you, but when I think of the location of the Hawaiian Islands I tend to think of it as smack dab in the middle of the Pacific Ocean due west of California.

The Hawaiian Islands lie just below of the Tropic of Cancer–so if you want a “due west of” think Southern Mexico. To put it in USA geography terms, Key West (the Southernmost point in the continental United States) lies north of the Tropic of Cancer.  In fact, Hawaii is so remote that it is not even considered part of the North American continent (see the map from World Atlas below)!

The reason I’m mentioning this is because we decided to split our trip to the Big Island by spending a couple of nights in Kona and then a night in Hilo.  April & I were in charge of selecting the route and finding fun things to do along the way to Hilo.  We opted for the Southern Route, which afforded us options to drive through the mountainous terrain of Kona, the overlook of Kealakekua Bay (where the fate of Captain Cook was decided), the volcano lava fields, the Mauna Loa macadamia nut company, a green sand beach, and the actual southernmost point in the United States.

After we left Greenwell Farms, we headed south down the main “highway.”  Actually, highway was a bit of a stretch–much like our “yacht” in Greece.  Winding, narrow two lane road is a bit more accurate, but it was scenic, so we didn’t care!  Or perhaps Tracy did, since he was the one driving….but we girls didn’t mind one bit!  😉

Our first stop came only a few minutes down the road when we drove by the South Kona Fruit Stand.  We decided that smoothies were the perfect thing for our trip south, along with some very interesting fruit we had never heard of…or heard of but never tried, like lilikoi, star fruit, and dragon fruit! 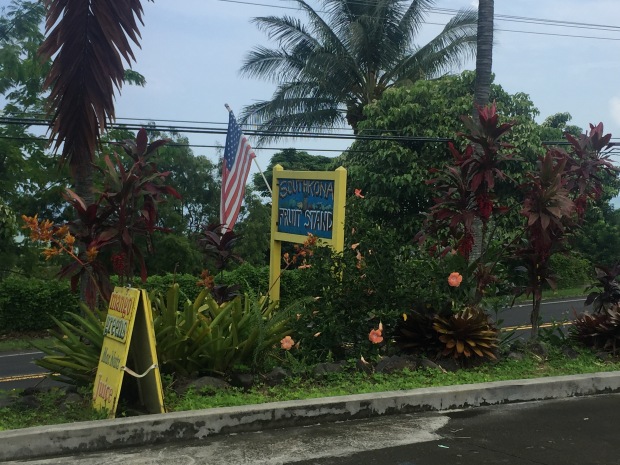 So we turned off the “highway” onto an even smaller road and wound our way here and there whilst following signs to the green sand beach and Ka Lae.  We actually went to the beach first but it is deserving of its own post.  After our trek to the beach, we stopped at Ka Lae for a glimpse of what seemed to be the edge of the world.

For those of you who would love the chance to jump off the edge of the world, there was even a platform–and a group of people willing.

And just in case you didn’t feel like scaling the steep wall back up or drifting out to sea (although I don’t see why not, after all the Kiribati Atolls are only 1200 miles away!), there was even a ladder to help you.

I peeked over and decided I was perfectly happy not jumping and drifting off to sea and/or climbing the ladder of death back up.

A few more quick shots and then we were on our way–having crossed off another item on our Hawaiian to-do list!

When most people think of Hawaiian beaches, they probably think of something like this: 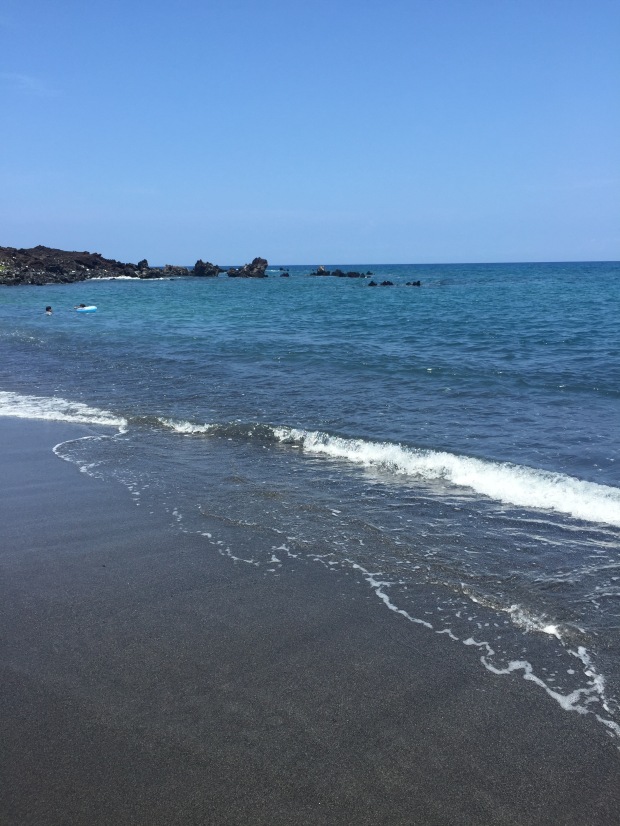 If you’re saying to yourself : “Self, that sand sure looks black,” you would be correct!  It is, in fact, a black sand beach (which shouldn’t surprise any one who read Pilgrimage to (Coffee) Mecca).  But here’s a fun fact that might surprise you about Hawaii: all beaches are public.  ALL OF THEM. It doesn’t matter if they are on a military base or in a fancy gated community, they all have to have public access.  ALL OF THEM.

This is quite handy knowledge when you’re planning beach activities and have never been to Hawaii.  It was also information that we did NOT have at the time of planning our Hawaiian vacation.  All we knew is that we had never been to a black sand beach before and we definitely wanted to visit one while we had the opportunity.  We found several north of Kailua-Kona and randomly picked the one closest to where we were staying.  It was in Kamuela and called 49 Black Sand Beach–so it sounded perfect, after all “black sand beach” was in the name!  As we turn off the main road and are making our way down a tiny winding road, we notice that dead ahead is a gate with a security guard.  We were a little hesitant, as our information on said-beach never mentioned anything about it being private or in a gated community.  We pull up to the gate, thinking perhaps Siri was a bit lost, with the plan of asking the guard for actual directions to the beach.

SIDENOTE: I just googled “49 Black Sand Beach” to make sure that I had the right spot and here’s what Luxury Big Island has to say about the community where this beach is found (aka why we had to stay on the visitor walkway)–

The community of 49 Black Sand Beach is an ultra-exclusive private enclave of just 49 custom homes and home sites nestled atop rugged cliffs on the Big Island’s Kohala Coast. Inspired by its sensuous and unparalleled natural landscape, 49 Black Sand Beach overlooks the Honoka’ope Bay and its exotic and unique 800-year old black sand beach. The community as a whole sits on 60-acres of private oceanfront property, 18 of which are on beachfront bluffs with the remaining home sites found fronting the Mauna Lani South golf course. Ideal for those seeking complete isolation from the hustle and bustle of the city, potential buyers will find the community of 49 Black Sand Beach to perfectly blend picturesque natural surroundings with all the amenities and luxuries you would expect of a world-class resort.

Along the visitor walkway, we passed by some workers who were de-coconutting the trees (yes, I’m sure there is some official phrase, but basically they were disposing of all the coconuts which had either dropped or looked like they were going to drop onto someone’s car or head or small child).  As we passed by Christi made a comment about how fun it would be to crack one open while glancing at Tracy expectantly.  I’m not sure what she was expecting him to do–pull a coconut-cracker out of his pocket?

But before he even had the opportunity (he’s a magician, it could have actually happened!), we heard a voice from behind us say: I can open one for you.  We all turned around to see one of the workers weilding a large machete.  We agreed because, well, when in Rome Hawaii…and who tells someone with a machete “no”?

With a couple of well placed whacks, we had a coconut to drink!   We passed it around, so we could all try it.  It was warm but delicious.  However, it definitely needed some rum!

With our coconut in hand, we continued down the visitors walkway.  Suddenly, it opened into a span of black sand and blue water.  It was stunning.  It was mesmerizing.  It was hot.  Really, really hot.  Which makes total sense, since it was black sand and a warm, sunny day.  But it’s not something your brain fully comprehends…you just think oooohhhh…beach….let’s take off our shoes and walk run squeal and haul ass quickly to the cool water looking like an over-animated cartoon character.

We poked around for awhile, however, beach itself was a bit too warm to lounge around on for a long period of time–plus we had other things to see, places to go, food to eat, and beverages to drink! We soon headed back up to the visitors walkway.  As we passed by the workers again, our machete man waved his machete at us–which we totally interpreted as “do you want a coconut for the road?”  We just waved, thanked him again, and happily walked back to the car.  One coconut, a man with a machete, some hot black sand, and cool, crisp water made for a perfect Hawaiian experience.