Also known as the Blue Mosque, the Sultan Ahmed Mosque was built from 1609-1616.  While seven years may seem like a long time, when you arrive and realize how enormous and intricate it is, you’ll be impressed that it only took seven years!  In fact, it makes the neighboring Hagia Sophia look tiny in comparison.

It was quite humbling being in such a beautiful and awe-inspiring place.  The pictures below, however, do not do it justice.  That certainly is not a dig at April or my photography skills.  They cannot convey the craftsmanship poured into each of the 20,000+ tiles that cover the interior from floor to ceiling or the time spent creating over 200 stained glass windows. But even more simply than that, they cannot convey the serenity one feels while being in such a majestic place.

one of six minarets.  it is the first mosque (of only two) in Turkey to have that many!

walking through the outer wall and into the courtyard 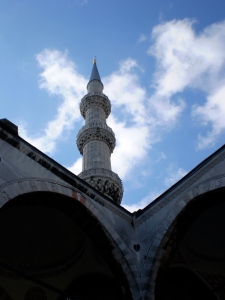 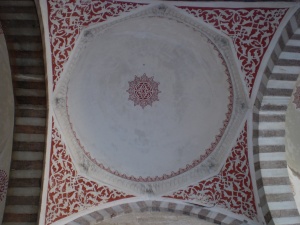 ceiling decorations of the courtyard walkway 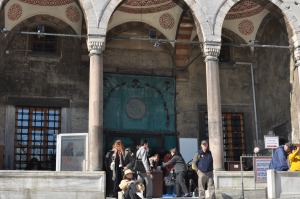 the entryway where we were asked to remove our shoes. there was also a basin, should anyone want to cleanse themselves (usually arms, feet, and head) before entering for worship. 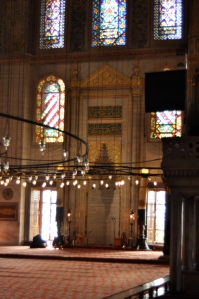 the doorway where we entered 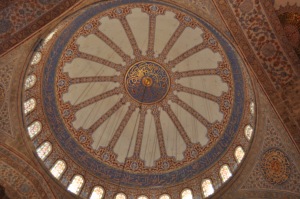 even the pillars were tiled

a close-up of some of the stained glass windows

the Women’s area of worship. 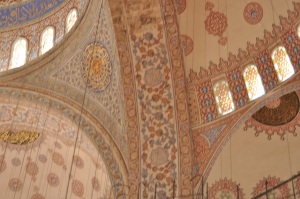 …and a closer look at the detailed work

the main floor has a huge space for worship surrounded by walkways to the other parts of the mosque.

After we were finished–and because it was right there–we went to have a look at the famous Hagia Sophia.  Unfortunately, we didn’t have time for a tour, but the gardens were quite spectacular!

The gardens between The Hagia Sophia and The Blue Mosque 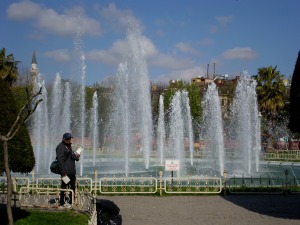 The fountains in the garden.

A side shot of the Hagia Sophia 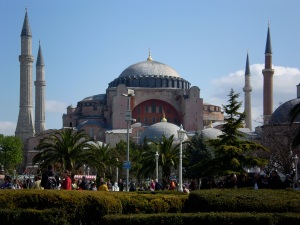