Okay, I’ll admit it–I’m not the best about reading the Travel Guides thoroughly.  Sure, if something catches my eye, I will read it. But for the most part, I just skim and glance and flip through the pictures.

So when I read that The Florida Keys had over a thousand islands, it didn’t register properly.  Obiviously, as I was suddenly struck with the grand idea to check in (on Facebook) at each island as we passed through on our drive from the mainland to Key West.

I thought I was being clever and funny.  Honestly, I was expecting to drive through maybe 10 islands.  MAYBE.  Oh, but no…there were more….so many more, much to everyone who follows me on Facebook dismay.  Apparently there are 43 islands connected to Highway 1–so really everyone on Facebook should be thanking me because I know that I didn’t check in to that many islands.  I saw several on the way back that I know I missed, but in order to keep the Facebook peace, I figured it wise to NOT check in on the way back, even to those islands we missed on the way down! 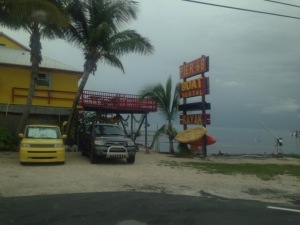 I didn’t mean to miss them–honest!  But we were driving through some of them so quickly (as in the island itself was tiny, not that TK was driving fast), that sometimes I was still waiting for one check-in to post as we entered a new island!  Somehow I feel that no one minded (other than my OCD) that I skipped a couple.

Keys were everywhere!  Sure, there were the famous ones we’ve all heard about like Key Largo and Islamorada, but then there were random Keys, such as Elliot Key and Pelican Key and Jeep Key and Sugar Loaf Key and Summerland Key and Big Pine Key and Little Pine Key and I could go on and on and on.  Rather, I dutifully checked us in every time we crossed a bridge into a new Key!  TK thought he’d be hilarious and checked us in (well, since he was driving TECHNICALLY Sissy used his phone to check us in) to Car Key.  HA HA HA HA.  It’s funny.  C’mon–even if you weren’t there because if you were, you’d think it hilarious!

By the end, probably no one was more sick of my genius plan than I was.  I happily checked us in to Key West (because I am NOT A QUITTER!) and threw my phone in my bag to observe the end of Highway 1, as we literally ran out of land.  So we hung a left and went to the airport, where James was waiting patiently for us to pick her up for our Key West adventure to begin!