Things change.  I know, I know–let the eye rolling begin.  However, I am only mentioning this because for my 30th birthday I received the book 1000 Places to See Before You Die.  In the USA chapters, it lists International Falls, MN as one of these places.

I have been dropping hints to April left, right, and center EVERY SINGLE TRIP–or even mention of a trip–to Minnesota I’ve made since I got this book.  For 10 long years has poor April had to endure these not so subtle hints, which is apparently her ceiling for being harassed 😉

International Falls, MN:  one of top 1000 places to see before you die?  Ummmm…I’m going to have to agree to disagree on this one.  DO NOT GET ME WRONG.  It’s a great little town, and yes, we were there during start of low season, but the Falls–which are to be the highlight of International Falls–are actually covered/been diverted or something the nice border patrol agent told us that I can’t remember right now…

It is also known as the coldest place in the United States, but honestly, I have NO DESIRE WHATSOEVER to experience that.

What you don’t want to miss is the giant Smokey Bear in the middle of town.

Oh c’mon…don’t even act like you aren’t going to stop the car and take a couple of pictures if you were driving through and saw it.  Besides, April and I have a penchant for tracking down the “World’s Largest [fill in blank here]”.  I could probably create an entire blog for that, but instead you’ll just have to settle for a few posts.

It was a nice change of pace and the scenery was gorgeous.  We stayed in a cute B&B right on water.  It was right outside of town and had a large lumberjack to greet us! 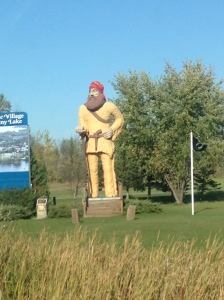 Because we were the only ones there that night, we were upgraded to the biggest suite.  It was rather peaceful just sitting out on the deck–albeit a bit surreal knowing that I was looking at Canada.  It was also rather remote.  Sure there was a railroad and were a lot of cabins and houses around, but most were vacant and or sparsely filled.  Not that we minded, it allowed us time to wander around the neighborhood.

It was fun and I’m very glad that we went…even if the entire trip April kept giving me looks of “this is why I’m confused why you were so insistent about coming here.”  Should you go?  Absolutely!  Must you see it before you die? I’m gonna say no.  There were other places on our trip that I thought were more must-sees than International Falls, which is why you should always listen to your darling friend that grew up there, even if a book suggests otherwise!

PS–I do want to leave you with a bit of advice: if you do go to International Falls, MN and you get a slightly remote B&B by the water and you and your friend are the only ones in the house that has no locks and your friend who lovingly drove the entire trip turns in early because she’s tired, you should NOT start a Criminal Minds marathon.  I’m just saying…creeeeeeeepy!