For the record, this isn’t what I wanted to share with you today.  But in the interest of actually getting something posted, I had to improvise (let’s just say wifi and technology haven’t been my friends this week!)

I could have easily made this picture a Wordless Wednesday post, but it was suggested to me last week that not writing in posts was “cheating”–so here’s my little blurb about this slightly fuzzy pic.

It is the glow of the Kilauea caldera from the Observation point at the Hawaii Volcanos National Park.  I’m 99.9875% sure April has a sharper picture taken with her camera rather than with my iPhone, but I’m 100% sure if I went looking for it, I would miss the deadline for posting this today! 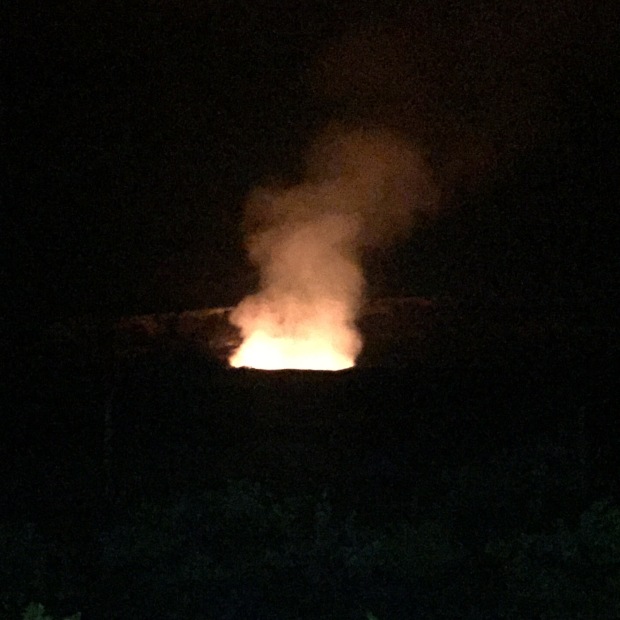 Here are some tidbits from LiveScience website about Kilauea (click here to read more about the eruptions of Kilauea):

Kilauea is one of the world’s most active volcanoes. It is a shield-type volcano that makes up the southeastern side of the Big Island of Hawaii. The volcano rises 4,190 feet (1,227 meters) above sea level and is about 14 percent of the land area of the Big Island. The summit caldera contains a lava lake known as Halema`uma`u that is said to be the home of the Hawaiian volcano goddess, Pele.

To the casual observer, Kilauea appears to be part of the larger volcano Mauna Loa, but geological data indicates that it is a separate volcano with its own vent and conduit system. Kilauea has had 61 recorded eruptions in the current cycle, according to the U.S. Geological Survey, and has been erupting on a continuous basis since 1983.

Native Hawaiian oral traditions record the extraordinary eruptive history of Kilauea long before European and American missionaries wrote about it in their journals. Scientific study of the volcano began when geologist Thomas Jagger of the Massachusetts Institute of Technology visited Hawaii on a lecture tour and was approached by local businessmen. The Hawaiian Volcano Research Association (HVRA) was formed in 1909. In 1919, Jagger convinced the National Weather Service to take over the pioneering research, and in 1924 the observatory was taken over by the U.S. Geological Survey.

Also if you’re interested in seeing What’s Going On With The Volcano, click on the link to be taken to the National Park Service webpage for volcano updates.