In following up to my More From South Ferry post, I was chatting with a fellow blogger, Andy (of The Wandering Poet–check out his website!), about some of the amazing murals that can be found on the New York City subway platforms.  This reminded me of another series I wanted to bring over from my other blog shezzaspeak: Subway Art.  Plus it occurred to me that perhaps you want something other than Hawaii 24/7…

If you’ve never been to Pennsylvania Station in New York City, it is busy.  In fact, it is said to be the busiest train station in the Western Hemisphere.  I don’t have all the data to back that up, but I feel anyone who has ever navigated Penn Station during rush hours would agree.

That is a lot of people.  But you’re not here for the people, you’re here for the pictures.  And not only is Penn Station busy, but it is also big.  Perhaps not as big as the commuter numbers might suggest, however, it is expanding.

What that means in terms of this blog is that you’re going to see several different posts from Penn Station, as each section has its own style and they are all very different from each other, so I felt it a slight to craftsmanship to slap them all in one post.

This first set is from the New Jersey/Amtrak transit side of Penn Station at the 7th Ave & 31st Street exit. 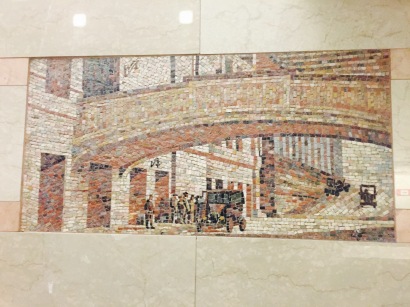 It is also large and expanding.  This is all just a preface to explain