Let me sum up an email chain while trying to organize our Turkey trip.  Please know this is a very liberal translation, as those emails are hopelessly lost in an email account that was viciously hacked causing me to start over with a new email and all that jazz…but I’m not bitter.  At. All.

Anyway, where was I?  Oh yes, emailing:

April: I found a tour that encompasses ANZAC day activities and Istanbul and several historic sites like Troy and Ephesus….and…IF we wanted, we could add a yacht cruise through the southern Greek Isles.

Me: Hell yes we want to add a yacht cruise through the southern Greek Isles!  Don’t we?

April: yes, of course we do (NOTE: April has much better sea legs than I do, but I have a much better sailor’s mouth than she!!)

Now when I think of yacht, I think:

And I knew KNEW there was no way our yacht was going to look like that.  However, I was NOT prepared for the S.S. Minnow.  Okay, so it wasn’t that bad…but it was close. 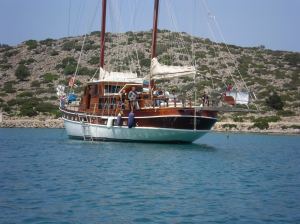 Granted it’s a cute little boat.  But it was not a yacht.  NOT A YACHT!  And it had 10 very tiny cabins.  Thankfully the fabulous and wonderful Osgur, our Turkish guide, talked the Captain into letting April & I have our own separate cabins since we were not a couple.  Good thing too because these cabins were the tiniest spaces, with beds slightly bigger than a twin.

One thing the  boat did have going for it was that we had the best chef.  Every meal he prepared was amazing.  I even ate eggplant–and liked it!  And for the record, I don’t like eggplant and tend to avoid it like the plague…but his eggplant was delectable.  Turns out he was using baby eggplant and through a series of gesticulations and a very broken English and Turkish, I believe he said that only baby eggplants were worth eating.  Now would be a great time to mention that between the Captain, Chef, and Deck Hand, they spoke maybe 20 words in English, which of course, was much better than our 3 words in Turkish!  Sorry, no pictures of the food–we were way too busy eatin’ to even think about snapping pictures!!

Our aft-side cabins smelled like diesel any time the  boat was in motion, which was a great motivator to be outside taking in all the fresh air and stunning views of  the open waters of the Aegean Sea.  More than once I was awoken way too early by the sounds and smells of the motor running, so I would just grab my blankie and went to nap on the deck.

The water was so blue and clear it was stunning.  We did have a couple of swim stops, but as the water was fr-r-r-r-r-reezing, April and I abstained. 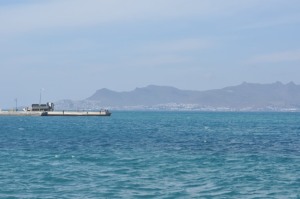 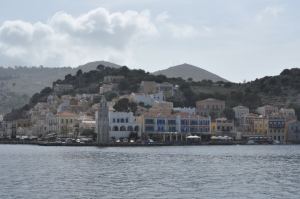 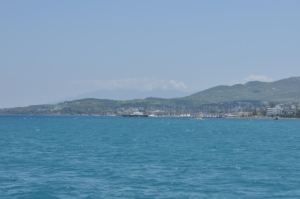 One final note: we had a fellow tourist who was continually lamenting about how the “haze” was completely messing up his pics…The HAAAAAZE!!!….but I rather think it gave some of our pictures a nice air of shrouded mystery, which I feel is perfectly acceptable when you’re on a  boat in the middle of the sea.

One thought on “Thanks a Yacht!”