First, let me apologize and TOTALLY blame George R. R. Martin for lack of posts this week.  Since both my most and least favorite characters are seemingly dead, it’s back to work!

In addition to Lucille, I got another really cool birthday kitchen gadget: a crockpot.  Two actually, in a set, a big one and a tiny baby one.  I’ve always thought crockpots were fun, but now that I have one I realize they are da’bomb!!!

For those of you without an Addy in your lives, crockpots are great for throwing stuff in it in the morning, turning it on, leaving for work and viola! dinner when you get home.  However, since my darling pupcicle would see this as an open invitation to help herself and can reach all countertops in the house, for me, crockpots are great for throwing stuff in it at night and waking up in the morning with breakfast!  Or lunch or to put in the fridge for dinner.  Point being, I can’t leave my pupcicle & my crockpot unsupervised otherwise it will not fair well for the crockpot or my pupcicle when I got home.

But I digress.  What should I make?  Immediately, I went to searching on Pinterest, looking for a recipe that would be easy and preferably something I could make without going to the store.  Looking, looking, looking….and I FOUND IT! 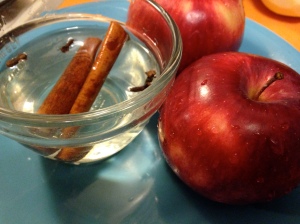 Applesauce, you say?  Yes, applesauce!  Having a new found love for apples and easy access to delicious orchard apples thanks to Wilklow Orchards, who sells delicious produce in the ferry terminal, I always have apples in the house.  I found this recipe by Fantastic Mom, which looked easy enough.  Since I’m not a big fan of sweetened applesauce nor one to leave well enough alone, I left out the sugar and added cloves, for a more “grown-up” taste (that’s in quotes because maybe kidlets like cloves and more intense/less sweet flavor).

So I chopped, chopped, chopped my way through a lot of apples, diligently peeling and coring. And ta-da–as promised a few hours later I had yummy applesauce.  Personally, I prefer really smooth applesauce, so at the end I put it through the potato ricer to give that extra smoothness that I love!  Nor did I wait for it to cool.  I discovered that I rather like warm applesauce…

HOWEVER…before I give you the recipe and having you drifting off to la-la-appleland, I have a contest for you (yes–YOU and YOU and YOU!!).  I name all of my appliances and gadgets, because, well, it’s what I do.  And my new crockpots need names, so I need your help!  There’s usually a reason for everything that has a name.  For example, my phone’s name is Alfred because, like Alfred Pennyworth, he does everything for me.  As you met Lucille last week, hopefully you got the I Love Lucy / Lucille Ball connection.  So, in that spirit my new little babies need names.  Winners get a prize, probably not from the crockpots because that’s rather hard to mail, but something else fun!  Ready, set…go!

Happy crockpotting!  And before I forget….