Ooohh!  Ooohh!  Super-special post today!  What makes this post so special you ask?  It’s written (well not this introduction, of course!) by April.  There are several things that come to mind when I think about ANZAC day, such as Dawn Service, Two-Up, poppies, and ANZAC bikkies to name a few.  The bikkies (aka cookies) are where April comes in.  IF a better than April’s ANZAC bikkie exists in the world, I have yet to experience it.  I’ve witnessed first hand the slight jealousy in Australians at the thought that a Yank could make their beloved treat better than they could.  Their jealousy is short-lived, mind you–usually by the second bite, at which point they just enjoy the delicious goodiness!

And now, ladies and gents, may I introduce the lovely and wonderfully fabulous April and her ANZAC bikkies:

If I am honest, Anzac biscuits were never a treat I had much when I was living in Aus; Tim Tams were my go-to for indulging. When I found myself stateside and wanting to bring in some homemade goods for my workmates to celebrate Australia Day, though, I knew there was no way I could make Tim Tams. So I searched online for some recipes I could do, and I found this one for Anzac biscuits. Fortune must have been smiling upon me because these bikkies are a hit wherever I bring them, and they are the number one requested treat from my coworkers.

Anzac biscuits first made an appearance during World War I. Australian wives, mothers, and girlfriends were concerned about how nutritious the soldiers’ rations were so they developed a recipe for a treat full of healthy ingredients like coconut and rolled oats. The components also did not readily spoil which allowed for the biscuits to remain edible after the long non-refrigerated transit to the frontlines. While normally a fan of cookies fresh from the oven, I actually find Anzac biscuits much tastier a few days after I baked them, which kind of ties in nicely with the end of my bikkie ramblings…

While preparing for my trip to Turkey in 2011, I got it into my head that it would be great if we could actually have some Anzac biscuits to eat when our group did our overnight vigil at the Gallipoli peninsula. So right before my departure I made two batches and packed them carefully in a place of honor in my suitcase for the long journey east. They survived intact, and several days into our excursion my travel companions were pleasantly surprised when I brought them out for Anzac Day. Sherry and I were the only Yanks on the tour so I think it was even more startling for everyone that the biscuits were delicious! I had more than one compliment that even in Australia they had not ever had such a tasty bikkie. So without further ado, here is The Recipe:

Mix oats, flour, sugar, and coconut together. Melt syrup and butter together. Mix bicarbonate of soda with boiling water and then add to the melted butter/syrup. Add to dry ingredients. Place by 1 tablespoonfuls on greased tray and allow room for spreading. Bake for 20 minutes at 300F (150 C). The yield is around 3 dozen depending on the size of your scoops.

That is the recipe I acquired from Aussie-Info.com more than 10 years ago. I haven’t made any modifications to it–why mess with perfection?–though you can get a fabulous treat using brown sugar instead of white. I can’t decide which one I like more so I always just make one batch of each. So happy baking, and remember, it’s always a biscuit and never a cookie! 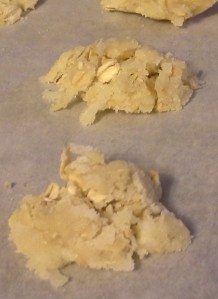 tasty enough to eat as is! 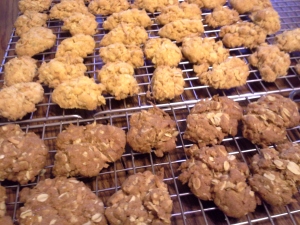 what a difference the sugar makes! 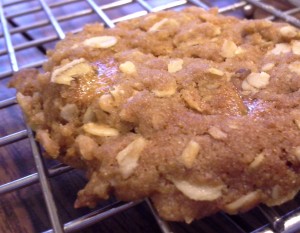