This month’s wine writing challenge is Second Chances.  It was selected by last month’s MWWC winner, Jill from L’occasion.  And I must confess that it was a bit hard to focus on second chances when all I can think of when I see second is:

But then I remind myself that the best breakfasts always include some sort of festive libation, which loops me back around to wine…and second chances.  And when I think about wine and second chances, three things come to mind.

The first thing I think of in regards to second chances with wine is a reminder I like to impart to new wine drinkers: keep drinking and trying wine outside of one’s preferred palate and don’t forget to revisit these wines from time to time to see if and how one’s palate has changed…a second chance, if you will. 😉  As their palate evolves, so too evolves their choices in wine.  Many will find that initially hated wines end up being a house staple.  Over the years working at the wine shop, I saw a lot of this with my regular customers who initially came in with the silly notion that “I don’t like [insert wine here]” and within a few visits, were drinking aforementioned wine–or at the very least, something similar. 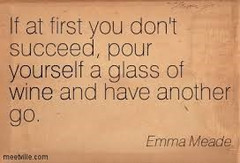 But I think it’s a valuable tip to seasoned wine drinkers as well.  Isn’t that why we purchase extra bottles?  To lay them down for months or years and try them again? At least in theory? At my house, rather than saving them, it usually ends up being “oh what the hell, let’s jussss open another riiiiiight now!”  And one turns into two, which turns into we’ll just get more at the wine shop later…stop judging me, it’s been a long week!

Anyway, I do a lot better hoarding my TEXAS! wine because you can’t purchase it here in New York City (or State for that matter), so I’m actually still sitting on a few bottles that I brought up with me 8 years ago (Becker, Grape Creek, Sister Creek, McPherson, Chisholm Trail, Messina Hof, and Flat Creek…alright, more than a few).  It is usually even more delicious the second time around (or third or fourth…depending on the number of bottles and your willpower!).  Although it doesn’t always go to plan and I’ve had to tragically dump a bottle or two.  However, that doesn’t mean that I go and dump them all–that would be a travesty indeed! For more tales about that, go here: Success.

Finally, don’t forget that the same can also be said of vintages!  So many things can have an effect on how a particular wine tastes from year to year.  Some years it is minute nuances, and some years it varies between “OMFG! This is the best they’ve ever made!” and “What the hell were they thinking?”

Take for example, Grape Creek‘s Cabernet Trois. Grape Creek has been making their Cabernet Trois for a looooong time now.  It is a blend of the three Cabernet grapes: Sauvignon, Ruby, and (my favorite) Franc.  It was THE first Texas wine I fell in love with.  It was deep and flavorful with just the right amounts of fruitiness balanced with spice.  At the time (mid-90s) it very much stood out from a lot of Texas reds, which tended to either be very sweet and heavy or thin and so dry the BFF likened it to leaving your mouth feeling like you’ve eaten sandpaper.  But not the Trois.  It was dry, yes, but with a lot of mouthfeel and delicate flavors.  It was delicious, won a lot of awards, and was my go-to Texas red wine for years.  But then slowly the taste of it changed.  I’m not sure if it was due to the grapes or the wine maker or the need to shake things up a bit.  Maybe all three!  People still loved it, it still won awards, but I was no longer a huge fan, preferring other varietals in Grape Creek’s line-up, like their merlot (shocking, but true, in fact, I still have a bottle of the merlot hanging out in the wine rack downstairs!).

Fast forward to a recent trip home where I was in my old wine shop tasting wines from all the new Texas wineries that have popped up in the last several years when my old favorite caught my eye.  Should I?  Should I not?  How could I not?  So I thought, “what the hell?!?” and gave it another chance.  And guess what?  It was back to having all those little nuances that I originally loved about the Cabernet Trois 20 years ago: the fruit, the spice, the mouthfeel.  It was like welcoming an old friend home.

Most importantly, it was a vivid reminder that in a day and age where it is always full steam ahead and looking for the next great thing, sometimes it pays to take a step back and revisit some old friends.  Thanks for the delicious reminder Grape Creek!

6 thoughts on “Try The Wine…Again.”